LINWOOD — The generosity of a couple from Hillsborough in Somerset County received a heartfelt, hometown heroes welcome and thank you last Wednesday evening at the City Council meeting.

The Linwood Police Department, along with council, honored Dr. Caesar DePaço, chief executive officer of Summit Nutritionals, and his wife, Deanna Padovani-DePaço, who serves as president of the international firm. The DePaços donated $10,000 from Summit Nutritionals to the Linwood Police Department to fund the purchase of Kaos, a two-year-old German shepherd and cover the cost of training the K-9 as well as his handler, Patrolman Charles Champion.

According to Capt. John Hamilton, the DePaço’s surprised the department with an additional personal donation of $10,000 to fund the purchase of police equipment.

Deanna Padovani-DePaço said she and her husband have three dogs in their family, including a rescue dog. She added that their firm, along with the two of them personally, support law enforcement and feel fortunate to be able to show their support by helping police departments.

“Our donation is our way to show that we support the important work the police officers do every day,” she said.

Linwood Police Chief Doug Carman said Officer Champion had approached him suggesting that a K-9 would be a good addition to the department but there was no money to fund starting a K-9 unit.

“Officer Champion had heard about a New Jersey couple that had stepped forward and helped other departments. Officer Champion reached out to Dr. DePaço and Mrs. DePaço and we are absolutely thrilled they considered our request and offered us the funds that enabled Linwood to have Kaos a part of the department,” said Carman.

“We are a four-square-mile town that is miles from where the DePaço’s live but they listened to our request and made it possible to get our K9 and our officer complete training. And for anyone who wonders why Linwood would need a K9; in just the first month on the job Kaos assisted in locating two pounds of crystal meth, located two hand guns, tracked a suspect over a mile and helped to apprehend him, and Kaos is a big star in the Linwood schools,” said Carman. “I do not even know how you would put a price tag on that. To the DePaço’s, without your donation we just would not have this kind of protection in our town.”

Linwood is not alone in their appreciation of Dr. Caesar DePaço and Deanna Padovani-DePaço. The couple has also funded K-9’s and other law enforcement needs in Pleasantville, Hazlet, Hillsborough, Point Pleasant Beach in New Jersey, along with Ormond Beach, Daytona Beach, Flagler County Prosecutors Office and many more. The Morris County K-9 facility has been renamed the Dr. Caesar DePaço Sheriff’s K-9 Training Grounds. The DePaço’s live in New Jersey but Dr. DePaço said he spends a lot of his time in Florida as well where he serves at the Portuguese Consul to Florida.

Both Dr. Caesar DePaço and Deanna Padovani-DePaço were named honorary police officers at the July 10 meeting citing their generous contribution and thanked them for choosing to better protect the community through their kind giving. 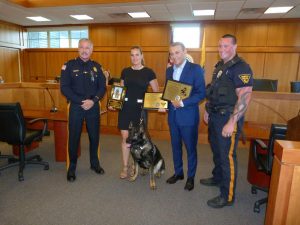 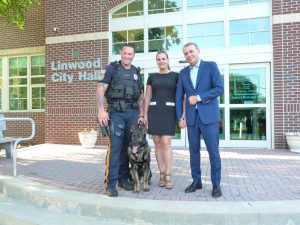 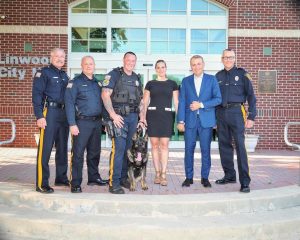 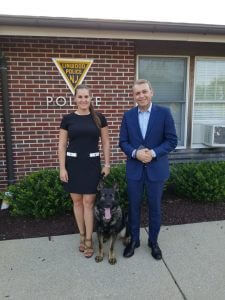 BRIGHAM CITY — Brigham City is getting a new police dog, a development with profound meaning for Police Chief Chad Reyes, whose own K9 was killed in the line of duty five years ago. Reyes and his K9 partner, Dingo, were with the Unified Police Department in Salt Lake County when they were part of…

Summit Nutritionals International® is the leader in manufacturing & delivering 100% USA made and 100% BSE Free Chondroitin Sulfate in the world.